A Case of German Shepherd Pyoderma

There are not to many dermatology cases I get referred  that are severely systemically  ill  and referred to me as an emergency, but Boo, a 10 year old GSD bitch was such a case.  With no real previous history of skin problems other than a seasonal otitis (probably mild atopy) Boo started developing small spots on the inside of her thighs legs which rapidly progressed over  3 weeks  to multiple open sores on both inside and outside her legs  on her trunk  and even around her lips. She was chewing at her lesions and was systemically ill with a mild anaemia and pyrexia (her temperature was 40.1 degrees centigrade. The skin was very painful to touch. To see the lesions properly, Boo had to be anaesthetised to allow a total body clip, as before this was done the coat was all netted up with dried discharge and the full extent of the problem could not be appreciated. 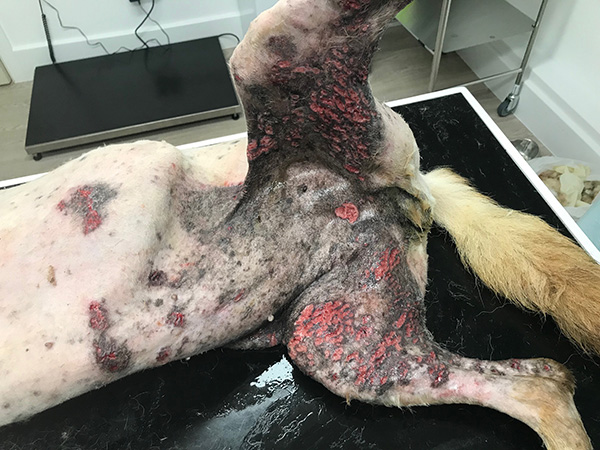 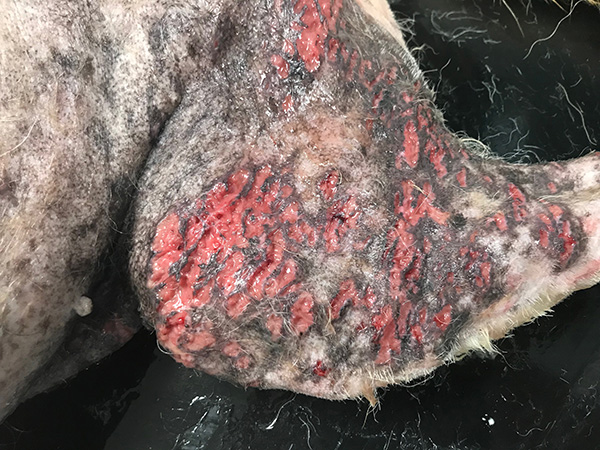 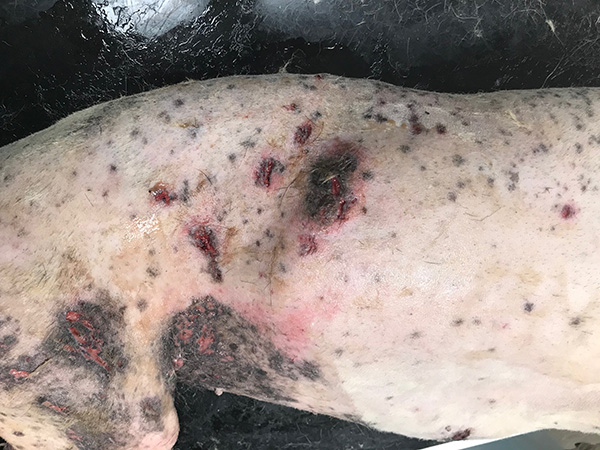 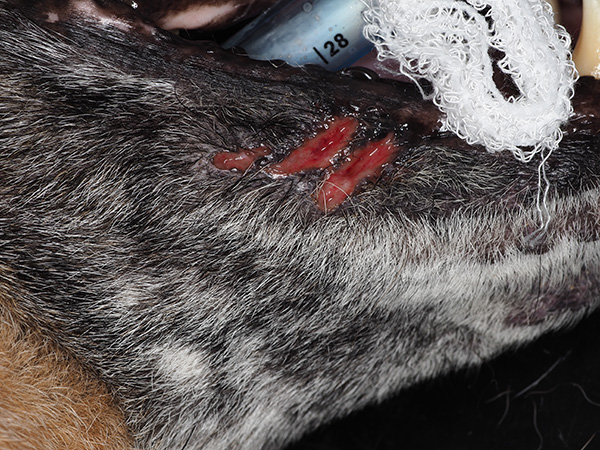 After total body clipping, swabs were taken for cytology  from the discharging lesions to be stained and viewed under our powerful microscope. Swabs were also sent off for bacterial culture. 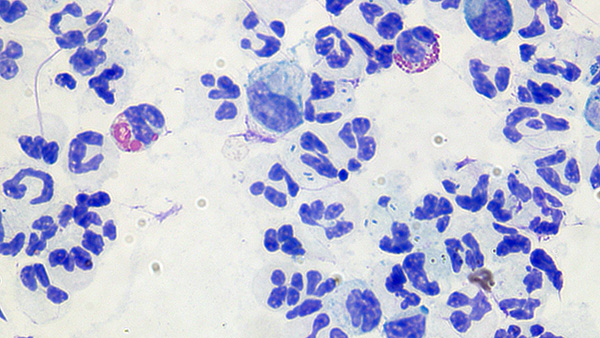 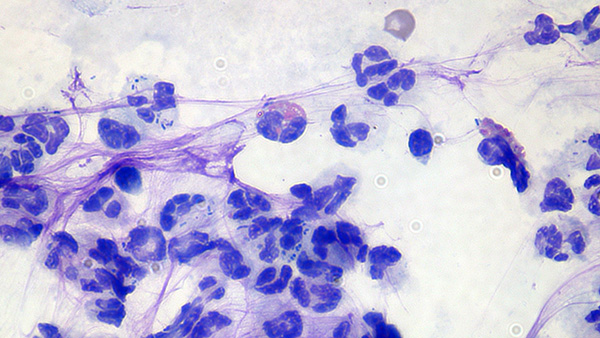 The results of the bacterial culture and sensitivity was a profuse growth of Staphylococcus pseudintermedius, Pseudomonas aeruginosa, E.coli amd Enterococcus. They all had differing antibiotic sensitivities but luckily they were all sensitive to Pradofloxacin which happens to be one of the antibiotics of choice for deep pyodermas due to its excellent penetrating properties  and and its low mutant prevention concentration (MPC) for many bacterial species that lowers the risk of antibiotic resistance developing.

Boo was there for treated with oral Pardiofloxacin in conjuction with regaukr shampooing with a Chlorhexidine based shampoo to keep the skin clear on dried discharges and attack the bacteria on the surface.

Within 3 weeks there was a dramatic improvement. 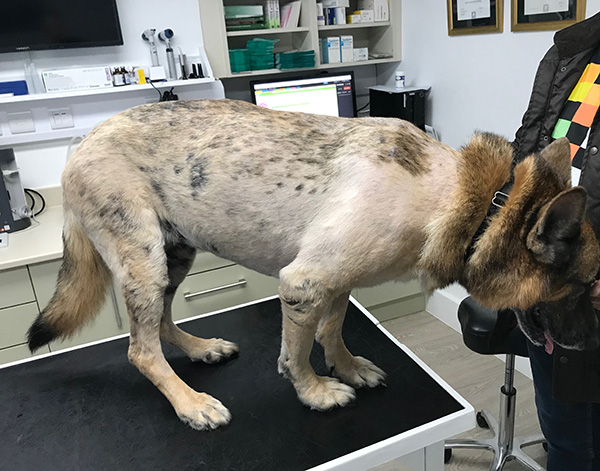 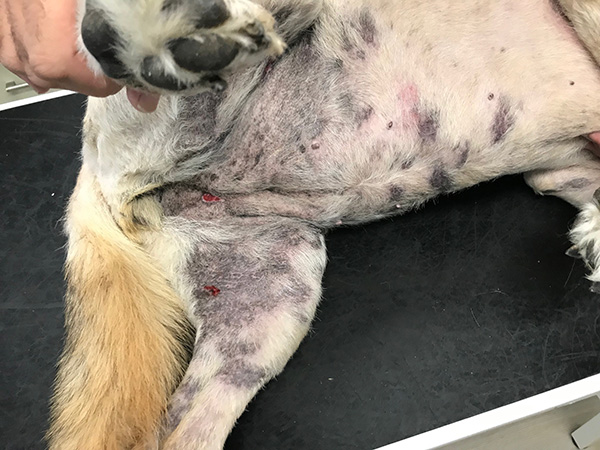 Inside thighs after 3 weeks oral Pradofloxacin and topical Chlorhexidine

Treatment with Prodofloxacin and Chlorhexidine was continued  for several more weeks 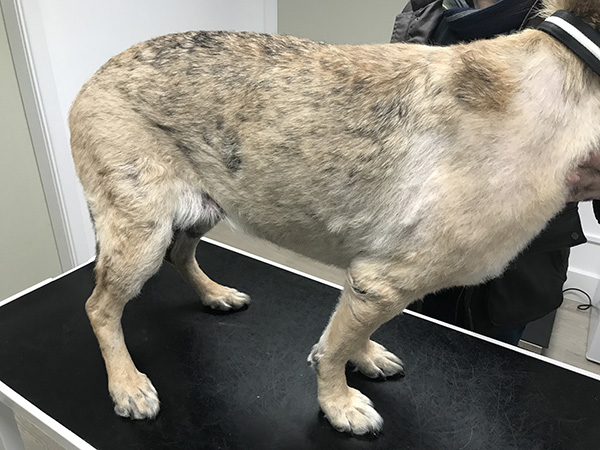 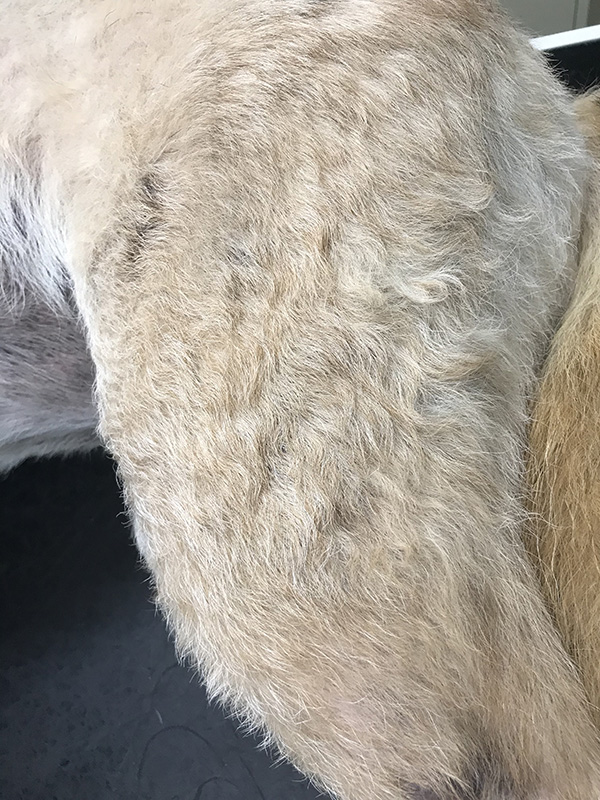 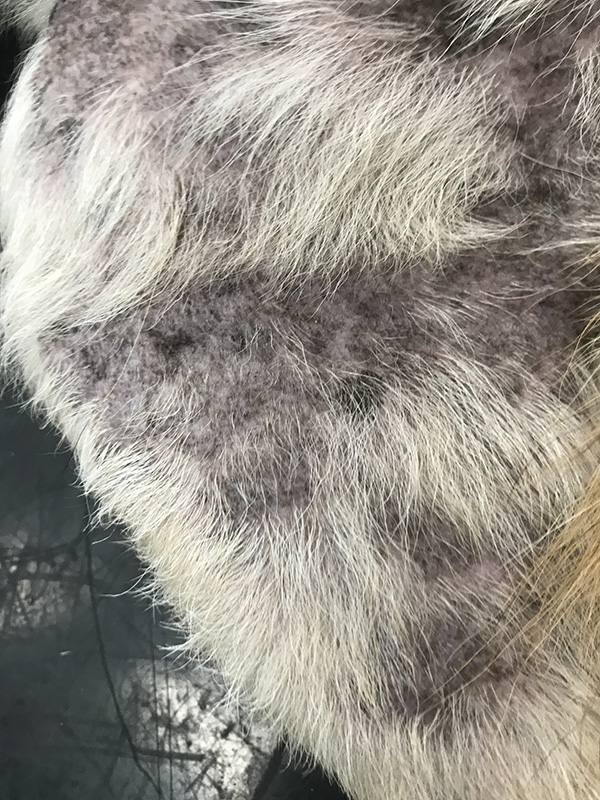 Final photos taken at 2 months and antibiotic therapy continues for another 3 weeks. Boo is now a much happier dog! 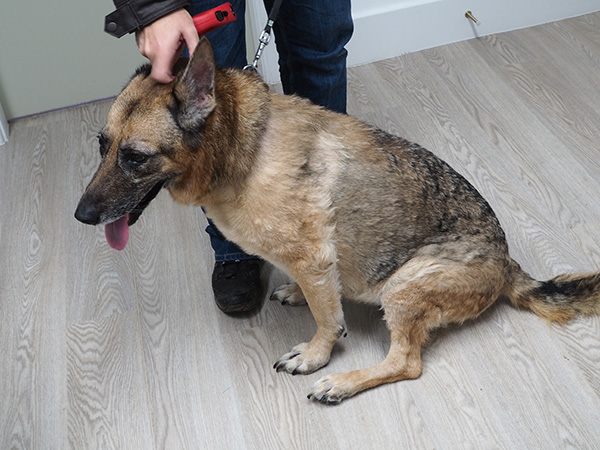 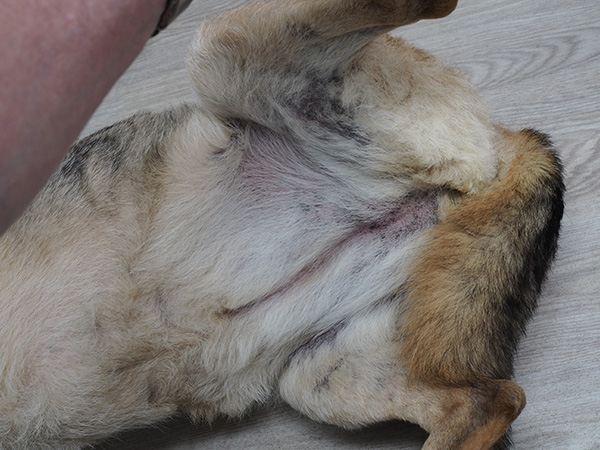 What is GermanShepherd Dog Pyoderma?

German Shepherd Dog Pyoderma is a rare condition. The last case I saw was in 2005!  It is thought to be a consequence of the unusual immune system of German Shepherds and some cases have underlying allergy or hypothyroidism ( Boo has a just below normal level of thyroxine, but this is common in “euthyroid sick syndrome”  where severe illness, such as this, can cause thyroid levels to be below normal).  Boo also suffers with mild atopy.  Both hypothroidism and atopy can predispose dogs to getting superficial pyoderma, but this is classed as as deep pyoderma or furunculosis where the infection breaks out of the hair ffollicle  and gets into the deeper layers of the skin. It is thought that in certain individuals there may be a heritable defect which results in an exaggerated  tissue response to staphylococcal bacteria characterised by  an inappropriate release of cytokines and other inflammatory mediators that causes severe tissue damage, hence the appearance of the skin with large ulcers. In Boo’s case the infection was further complicated by the invasion of the lesions with other bacteria, pseudomonas particularly can produce enzymes that destroys connective tissue.

We will be keeping an eye on Boo and double checking the thyroid levels now she is better. My last case form 2005  cleared up in a similar length of time and went on to live for years without a relapse.

The nearest  condition to this clinically  is one called “post-grooming furunculosis”, which can occur suddenly after a dog has been groomed and shampooed. The combination for microtrauma to the follicles caused by grooming followed by shampooing with shampoo or rinse water contaminated with pseudomomas can lead to an acute furunculosis similar in appearance to GSD pyoderma.