Adverse Food Reactions (AFR) causing skin disease, one of which is Food Allergy, are not always associated with a recent change of diet as many pet owners often believe. 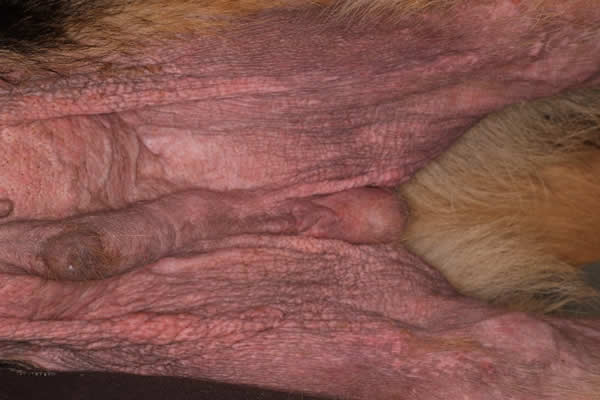 Food allergy usually takes time to develop and it is not uncommon for an animal to become allergic to a food that it has tolerated for years. Symptoms can be almost indistinguishable from those of atopic dermatitis in dogs with itchy ears and recurrent skin infections.

In fact, the boundaries of these two conditions have become blurred and some dermatologists now refer to Food Allergy causing itchy skin as “Food-Induced Atopic Dermatitis”. Some individuals may also have concurrent gastrointestinal symptoms such as diarrhoea and vomiting.

AFRs in many cases, do not respond as well to steroids. The signs associated with AFRs are usually non-seasonal and therefore AFRs have to be ruled out when investigating cases of suspected atopy. 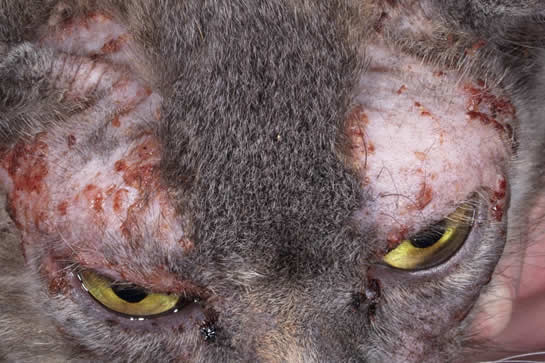 In cats, can present with the same range of signs seen with flea allergy and atopy – spots and scabs along the back and sides. A syndrome called eosinophilic granuloma complex can also present as ulcers and plaques on the body or lips and often as an apparent non-inflammatory alopecia, caused by excessive grooming.

It is generally accepted amongst veterinary dermatologists that there are no reliable blood tests available to confirm a case of food allergy/AFR. There are some companies offering blood tests, but they may only be of use in deciding which foods to avoid once a food allergy has been confirmed.

The only way to confirm an AFR is to feed an elimination diet for 6-8 weeks. This is done by feeding a home-prepared diet of pure sources of novel protein and carbohydrate. This is difficult for most owners as it entails sourcing and preparing exotic cuts of meat or fish that would not be used in commercial dog food manufacture.

Several commercial dog food manufacturers now produce diets suitable for an elimination diet – these are either based on novel proteins and carbohydrates or are one of the new generations of hydrolysed protein diets. Neither of these two types of diets is absolutely perfect as an elimination diet, as recent research has shown that around 5% of dogs with AFRs relapse on a commercial novel protein or hydrolysed diet.

For this reason, we usually recommend a hydrolysed feather-based diet as an exclusion diet, although on some occasions a home-prepared diet may be recommended.

Cats present a problem when it comes to feeding elimination diets as they have to be kept inside for the duration to stop them supplementing their diet with the local wildlife or popping next door for a bowl of the neighbour’s cat’s food.

It is vitally important that whilst on an elimination diet, no other foods, treats or chews should be given to your pet. It only takes a small amount of an offending allergen to keep the signs of food allergy going.

Also beware of pet store and supermarket foods labelled as “hypoallergenic”, as it is extremely unlikely that they are truly hypoallergenic in the sense that they would be suitable as an elimination diet to test for food allergy.

Are you concerned that your pet is suffering from some form of skin or ear condition? Do you worry that it may not be important enough to book a full appointment with a dermatologist?

At Dermvet we appreciate that you may just require a phone call with a specialist to get some advice about which steps to take next.

For your FREE telephone consultation with our highly experienced dermatologist, simply fill in the form below and we’ll get back to you to book a time for your call.

This service is for potential clients who are able to travel to Leicester, if necessary, to have their pet’s skin or ear condition investigated and treated.

If you’ve noticed skin or ear problems in your pet, it’s vital that you contact specialised veterinary professionals before symptoms worsen. To book an appointment with our small animal skin and ear experts, simply call us below