Flea allergic dermatitis is the most common form of allergic skin disease in cats and dogs and in theory can be caused by as little as one flea. The allergy results because of exposure to proteins in flea saliva.

Symptoms of flea allergy in dogs are usually fairly typical and most commonly start with inflamed skin and hair loss along the lower back and rump with papules crusts and scabs. There is usually intense itchiness if the skin in this area is rubbed. 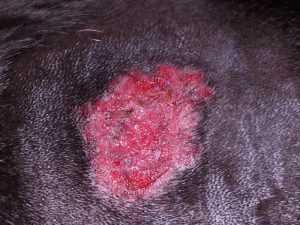 As time goes by, the lesions of inflamed skin, papules, erosions and crusts can spread to the flanks and abdomen. With chronicity, the skin in affected areas can become thickened and hyperpigmented. Other conditions such as pyotraumatic dermatitis or “hot spots” are often associated with flea allergy. Left untreated, flea allergy dermatitis is complicated by secondary bacterial and yeast infections.

The situation in cats, however, is very different. Cats can present with a whole multitude of different presentations as they also do when suffering with atopy and food allergy.

This can range from the most common presentation of a generalised papulocrustous dermatitis (“miliary dermatitis”) covering the whole body, but often concentrated on the lower back, to “ventral alopecia” when the overgrooming caused by the skin irritation leads to a hair loss on the underside of the body, often with not obvious signs of inflammation. 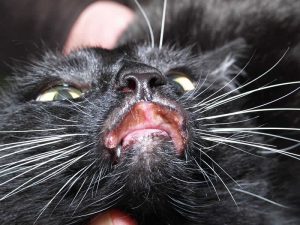 Cats can also develop eosinophilic granuloma complex (EGC) as a consequence of flea allergy (and atopy/food allergy), which can show as red raised plaques, nodules or ulcers both on the skin, lips (eg “Rodent Ulcer”) or even inside the mouth.

Flea allergy is due to either an immediate antibody response (Type 1) or a delayed, cell-mediated, response (Type 4). Diagnosis is usually made by response to a flea eradication control programme. Intradermal Skin testing with flea saliva extracts can be of some use, but this only tests for the Type 1 Hypersensitivity and false positives and false negatives can occur.

Blood testing, looking for IgE antibodies against flea are also available but suffer similar problems in only testing for Type1 Hypersensitivity and lacking 100% sensitivity and specificity. Often evidence of fleas (adult fleas or flea droppings) will be found on the animal, but in cats particularly this may not be the cases as they are very good at removing the evidence through overgrooming.

As a temporary measure, steroids can be given to alleviate the signs of flea allergy, however successful control of is dependent on both the destruction of adult fleas on the affected animal and, most importantly, on the eradication of fleas from the home.

To achieve this, a full understanding on the life cycle of the flea is necessary. 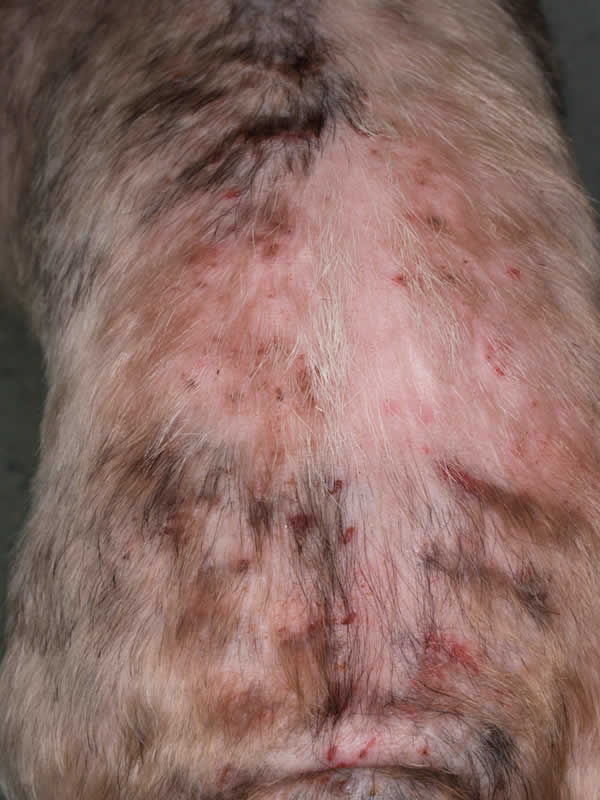 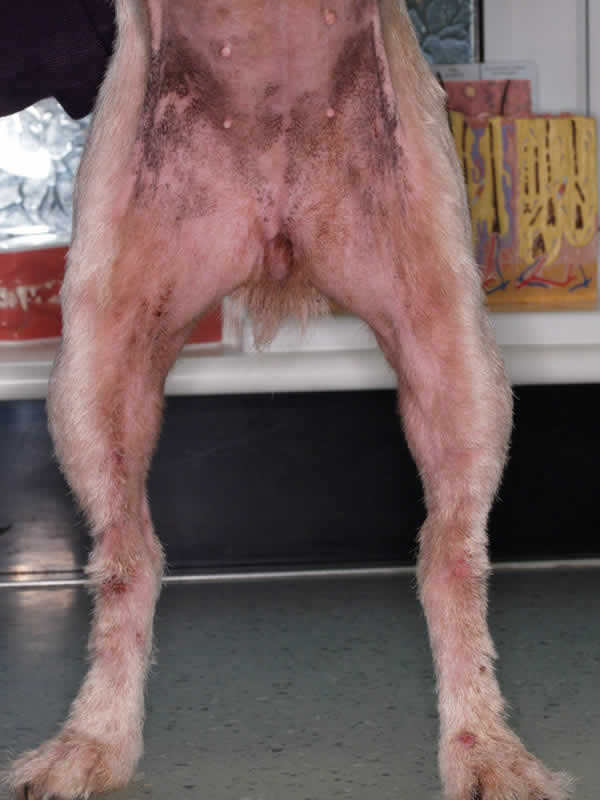 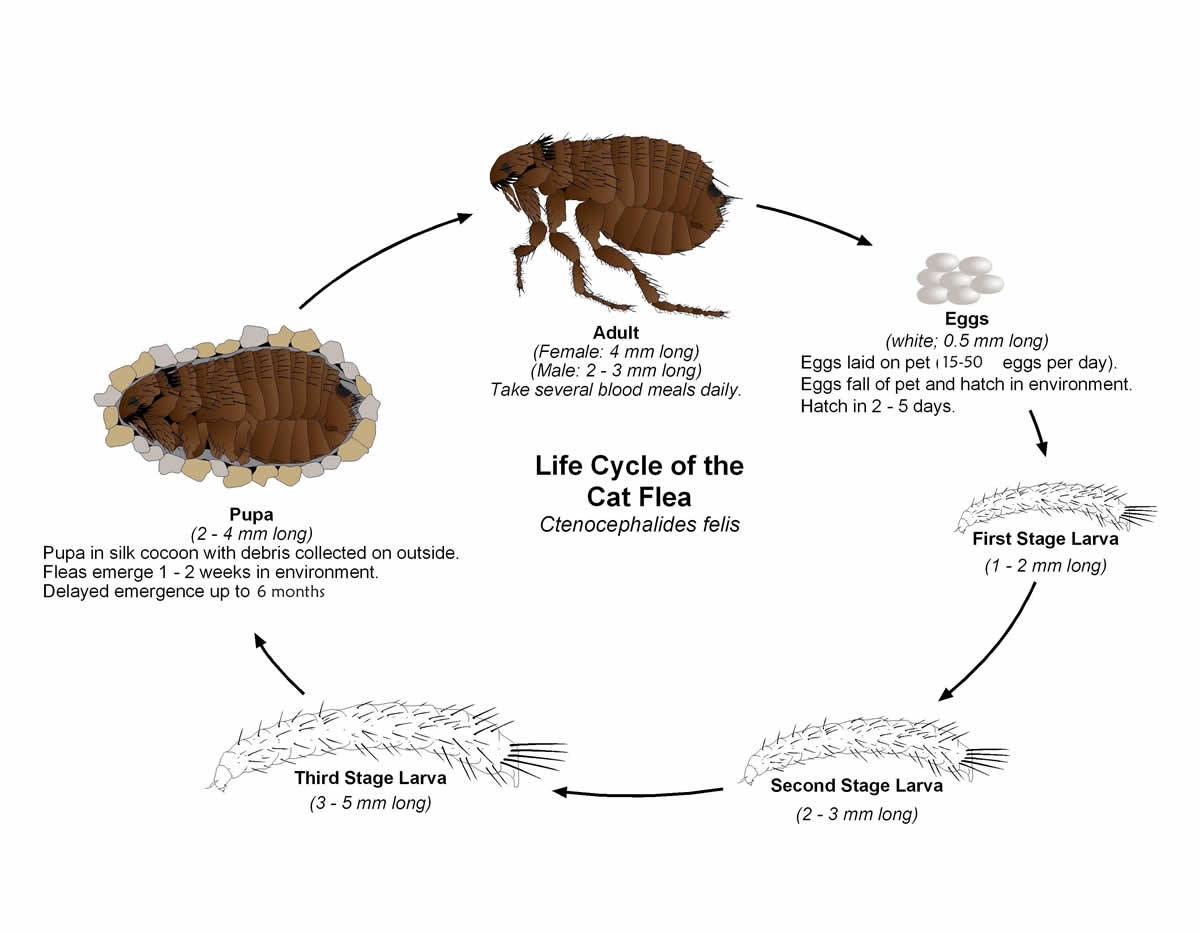 Once a newly emerged female flea jumps onto an animal it has a blood meal and will start laying eggs after 24 hours. Egg production is initially at the rate of 15-20 a day and after a few days can reach as high as 50 per day. A female flea can lay between 500-1700 eggs in a lifetime!
The eggs rapidly dry after being laid and drop of the animal and so can accumulate in areas where your pet lays down. The eggs can hatch in 1.5 to 10 days depending on temperature and humidity.

Newly hatched flea larvae crawl away to the deep layers of bedding, carpets, cracks in floorboards etc and away from light. The larvae feed on the faeces produced by adult fleas. Research has shown that, surprisingly, a normal floorboarded room without carpets can harbour as many flea larvae as a carpeted room, the larvae surviving in the gaps between the floorboards. Flea larvae have a more difficult time on laminate and vinyl floors but can still survive in rugs and furniture.

The larvae moult twice before pupating in between 5-12 days. The pupa will be found deep inside carpets, in bedding, under rugs etc indoors and in soil and vegetation outdoors. However, the greatest number and most significant number of pupa will be in the house.

The adults will emerge from the pupa in 7 -19 days but can remain in the cocoon for up to 6 months as pre-emerged adults. Hatching of the pre-emerged adults is triggered by heat and pressure and the CO2 produced by the host as it walks past or lays down. Left untreated, a couple of fleas brought into the house, can result in thousands being present as eggs, larvae, pupae or adults in only a few months.

If you find fleas on your pet there will be eggs etc in the home. Most of the fleas found on your pet will be fleas that have jumped onto them shortly after hatching – there is little movement of fleas between animals although this can occur more frequently in multi-animal households where there is close contact.

Adult fleas start feeding within seconds, sucking blood from the host and mating occurs within 24hrs. The life expectancy of the adult flea can be up to 133 days but, is much less due to grooming activity – the average life expectancy in a cat is around 2 weeks as they are swallowed during grooming.

Grooming activity in cats should not be overlooked as it is possible to have marked signs of flea allergy with little, if any, evidence of fleas (fleas and flea droppings).

If fleas have been found on your pet it is vitally important to treat the environment as well as the animal. Don’t forget that pre-emerged adults can remain dormant in cocoons, waiting to jump onto your pet for up to 6 months.

Thorough vacuuming of all surfaces in the house (carpets, rugs, sofas etc) is necessary, paying particular attention to the areas in the vicinity of where the pets lay down. Vacuuming with a beater bar type cleaner can remove as much as 90% of eggs and 50% of larvae and 95% of emerged adult fleas with the effectiveness decreasing as the density the carpet pile increases.

Vacuuming will also stimulate pre-emerged adults to emerge. Don’t forget cracks/gaps in floorboards, skirting boards etc and use the vacuum cleaner’s tools if necessary. After vacuuming, dispose of the contents in a sealed bag either by burning or freezing.

Animal bedding and human bedding frequented by pets should be washed and dried at maximal heat setting to ensure flea death. After this has been done, a good quality environment spray should be used to deal with what is left. Use a product such as RIP Fleas that contains an insecticide and insect growth regulators that prevent larval moulting, so even if they don’t get enough of the insecticide, they are not going to complete their life cycle.

Take care and follow instructions if you keep any fish in the house. Follow the instructions properly as the most common reason for failure with this step is insufficient penetration of the carpet pile. At the same time, all animals in the house need to be treated with an adulticide. There are several good reliable treatments for killing fleas. The choice nowadays is whether you would prefer a spot-on or a tablet.

If choosing a spot-on flea prep, purchase from a vet, as non-prescription products are sometimes not very effective. There is now a new generation of tablets given either monthly or every 3 months. Tablets available through vets containing the active agent Spinosad can start killing fleas as quickly as half an hour after ingestion and the new generation of prescription-only tablets containing Isoxazoline insecticides (Sarolaner, Fluralaner Afoxolaner and Lotilaner) can start killing fleas as quickly as or up to 8 hours after ingestion and they also treat mites and ticks.

For a flea allergic animal, prevention and control of fleas is essential. In most situations regular monthly use of a reliable spot on or oral tablet can keep fleas under reasonable control. To be effective in controlling fleas all animals in the household need to be treated.

There is also a product containing the compound Lufenuron, which prevents fleas from breeding. This is given orally once a month or by injection once every 6 months in cats. This has been available for 26 years now and is very effective at preventing re-infestation of the home even though it has no insecticidal properties. Lufenuron blocks the synthesis of the insect protein chitin that forms the exoskeleton.

Chitin is also used in the formation of a tooth that the flea larva needs to cut open the egg when hatching. Fleas feeding on lufenuron- treated animals will not produce any viable eggs. As the home is the major source of adult fleas that we see in our pets, Lufenuron -treated animals will be rarely found with fleas, although occasionally they may be found due to fleas being picked up elsewhere.

If you’ve noticed skin or ear problems in your pet, it’s vital that you contact specialised veterinary professionals before symptoms worsen. To book an appointment with our small animal skin and ear experts, simply call us on 0116 326 0402 or email us on enquiries@dermvet.co.uk.