One of the primary caused of otitis externa that we see in dogs and cats is a tumour in the ear canal. Tumours inside the ear cause otitis by occluding the ear canal  and changing the microenvironment , creating favourable conditions for bacteria and yeasts to proliferate and eventually leading to infection, discharge and pain.  In the past, the only way of dealing with these tumours was to either remove them with biopsy forceps via video otoscopy if they were very small  or with major surgery, either a lateral wall resection, vertical canal ablation or sometimes a total ear canal ablation (TECA-LBO) if they were larger.  Even if small tumours could be removed it was difficult to be sure that all tumour tissue had been removed and if the tumour was malignant then it could recur and still risk spreading to other parts of the body.

Another way of treating these tumours is to use a laser directed to the site via an optical fiber that can be passed down the channel of a video otoscope.  The laser can then be used to vaporise the tumour in situ if it is small  or to treat the remnants of the tumour after it has been debulked by traction or by the use of fexible biopsy forceps to cut it away from the ear canal wall.

I have now purchased at Diode Laser from  UK company Excel Lasers which means I can now offer alternatives to much more expensive and risky sharp surgery for the removal of ear tumours and other lesions inside the ear canal. The laser energy is passed down a 600microm wide optical fiber from the unit pictured, to produce an extremely localised area of intense heat that will cut, coagulate or vaporise tissue with minimal damage to surrounding tissue.

Here is a video of a recent case I treated.  Charley had a Ceruminous Gland Adenocarcinoma  almost completely occluding the ear canal and there was a secondary pseudomonas otitis.  After debulking the tumour, which luckily had a fairly narrow base, and waiting for the histopathology report, I went back in with the laser to destroy any remnants of this malignant tumour which would have been present.

This diode laser is also an excelent tool for treating  other lesios in  the ear canal such as:

More videos will be posted showing the laser being used to treat these two conditions. 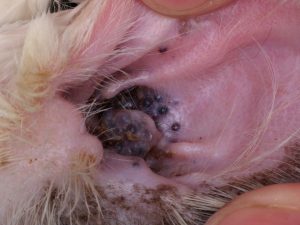 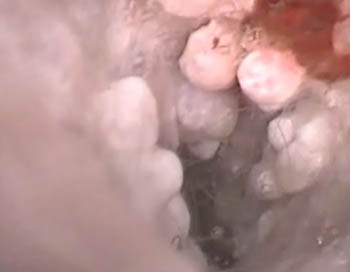