Ear disease isn’t that common in cats. Apart from infestation with ear mites (otodectes) which in my practice is most commonly seen in newly purchased kittens, otits externa, which is often seen in dogs, is only seen occasionally.

Very often , when I am referred a case or see a second opinion case of otitis, there is evidence of middle ear disease. There is either a purulent discharge coming from one ear, some sort of “mass” visible inside the ear canal, or both.

Last week I saw a young cat, about 14 months old, which had  a history of unilateral purulent otic discharge for 8 months.  Examination of some of these cases is often hampered by the fact that a hand held otoscope is a poor instrument for examining ears properly, unless the ear is 100% healthy. They are not very good are being able to appreciate,  in a 3 dimensional way, what exactly is going on deep inside the ear canal and what may look like a slightly opaque or disoloured ear drum, can be, in fact, something completely different.

A purulent otic discharge in a cat very often indicates the presence of middle ear disease.  Middle ear disease, in my experience, is as common as external ear disease in cats when it comes to seeing second opinion or referral cases.  Middle ear infection in cats, like in humans, can originate in the nasopharynx and spread up the eustachian tube to the middle ear and then break through the ear drum to the  external ear canal, or it can be a consequence of an inflammatory polyp originating  in the nasopharynx or eustachain tube which grows  into the middle ear and can  break through the ear drum and appear in the lower external ear canal.

Below is an inflammatory polyp that was removed from the ear canal of this young cat.  Sometimes you can be lucky and get these  out in almost one piece by a process of careful traction. You can tell if its nearly all out by the fact that it tapers to a narrow stalk. Usually the remaining bit of stalk regresses after this procedure, particularly if a course of steroids is given. 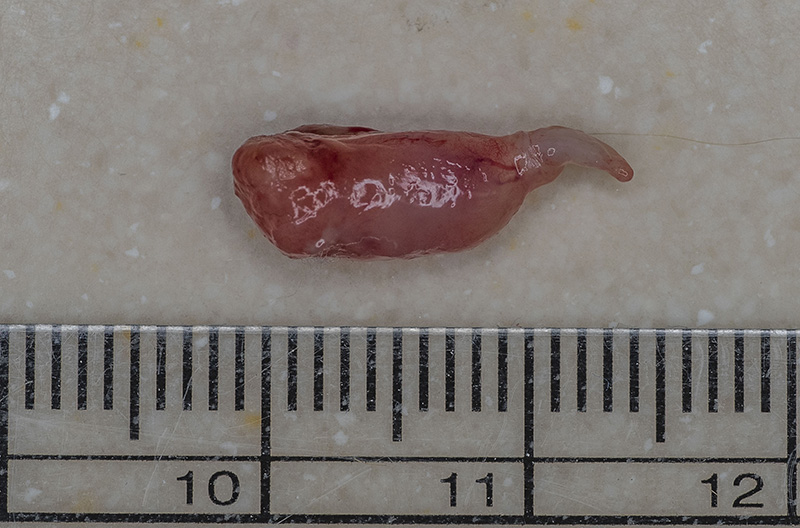 Sometimes, they are not easiy removabble by traction, they can break up with large amounts still left in the middle ear. In theses cases then sometiimes a surgical procedure called a Ventral Bulla Osteomy has to be done  to remove the remnants of the polyp and allow drainage of any middle ear infection.

Nasopharyngeal polyps are usually seen in young cats. They are not tumours as such, they are considered inflammatory and can be a consequence of URT infections and eustachian tube dysfunction.

Here’s a video showing the video otoscopy of this particular case. Unfortunately, the actual traction procedure could not be recorded by the video otoscope, but the appearance of the canal, ear drum and remaining stalk can be seen after traction.

If your pet is suffering with ear disease and you require the services of a Veterinary Dermatologist with a  special interest in ear disease.  Either email enquiries@dermvet.co.uk or ring 0116 3260402  to make an appointment to see David Bentley