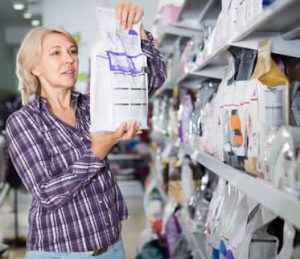 To be accurate, dermatologists refer to Adverse Food Reactions which can lead to skin disease. They can either be immunological (allergic) or non-immunological in causation.

Food Allergy was once considered a separate cause of non-seasonal allergic dermatitis from Atopy which is its major differential, but the discovery that antibodies of the same class as the ones found to environmental allergens in Atopy (IgE) can be found to individual proteins found in food, has led to the term Food-Induced Atopy.

All these figures revealed was the common ingredients in commercial pet food at the time. Back in those days and before, “Lamb and Rice” was considered a “hypoallergenic diet” as if somehow animals could not be allergic to it. Similarly, Venison was also considered to be “hypoallergenic”.

Both these foods are no longer considered hypoallergenic as they can be found in commercial diets and it has been found that there is a lot of cross reactivity between different proteins on allergy blood tests, eg. Between Beef and Venison, Lamb or Cow’s milk and between Chicken and Duck and Turkey.

In my daily work, seeing dogs and cats with suspected allergic skin disease, when I ask owners what they feed their pet on, I often get the response “ he/she is on a hypoallergenic diet from the pet shop already” or “I don’t think it’s food related” as he/she is fed either a) a “grain-free” diet or b) a “raw diet”.

It appears there is a lot if misunderstanding about why food allergy happens, what a truly “hypoallergenic” diet is, what foods can cause food allergy and there seems to be a mistaken belief that “raw” food, for various reasons, is somehow not going to cause food allergy. I’ll come back to my opinions on feeding raw food later, but for now let’s just concentrate of food allergy. 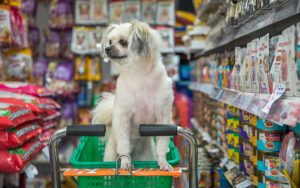 Grain free diets have become popular probably due to the perception that gluten is a significant allergen. In humans, it is the immune-mediated reaction to gluten (from several grains, including wheat, barley, oats and rye) that causes coeliac disease, a condition which does not occur in dogs (other than a colony of Irish Setters).

It certainly has not been found to be responsible for skin disease in any animals. When it comes to grain allergens, a recent review spanning 30 years suggests that wheat is only a problem in 13% of dogs and 4% of cats with Adverse Food Reactions. So, you can see how incorrect the assumption is that somehow feeding “grain free” is going to rule out food allergy. 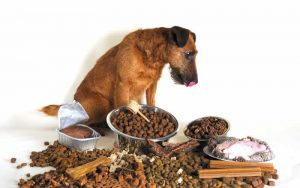 The problem with these diets is that legally, only major ingredients accounting for 20% or more of the diet are required to be declared. Minor ingredients can be grouped together as “meats” or “meat by-products”. It may be that the animal is not allergic to the major component but is to some of the undeclared ingredients.

Recent surveys, using DNA testing, have found a many as 80% of so called “limited protein”, “single protein“, “restricted protein” or “hypoallergenic” diets contain undeclared proteins which could be considered allergens. Another recent survey of 40 different pet foods including both wet and dry novel protein diets and even hydrolysed protein diets (more of those later) showed that only 10 of them contained ingredients that correctly matched the label. https://bmcvetres.biomedcentral.com/articles/10.1186/s12917-018-1528-7 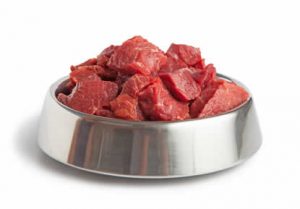 The current for feeding raw diets in the belief that it is somehow healthier and less likely to cause food allergy symptoms is not backed up by the scientific evidence.

In fact, some experts would consider it a dangerous choice. From a public health standpoint these diets can endanger the health of both the pet and its owner. A recent Dutch study (https://veterinaryrecord.bmj.com/content/182/2/50) found that 86% of products tested contained potentially hazardous bacteria including E.coli, Salmonella and Listeria.

Parasites such as Toxoplasma and Sarcocystis were also found in some samples. I myself have seen a litter of puppies very ill and one puppy die from Salmonella septicaemia due to feeding raw chicken. Even if an animal does not become ill itself from carrying E coli or Salmonella, it risks infecting its owner.

Pets used a therapy dogs, those living with young children, the elderly or with those who are immunocompromised for any reason should never be fed raw food. It is also quite possible, that cooking, which can alter the source protein, can make the meat less allergenic.

The Problem of Cross Reactivity

Recent work, some of it still to be published, has shown that there seems to be a lot of cross reactivity between different species of meat which may share a common evolutionary ancestor. This means that if one is trying a diet trial of a home-cooked diet using a single protein and single carbohydrate source, great care must be made in choosing those sources.

For instance, if a dog previously been fed diet which included beef as one of its sources, it would not be wise to choose closely related Buffalo or Bison in a diet trial. Even Venison, which can a common ancestor further up the evolutionary tree to beef, cross reacts and would not be an ideal choice. Similar Chicken can cross react with Turkey, Duck and even Ostrich.

It is for this reason that the future of food allergy diet trials/treatment, may be looking at insect-based diets!

As an alternative to feeding a home-prepared single protein/single carbohydrate diet as a diet trial for testing for food allergy, for the last 15 years or so, some pet food manufactures have developed hydrolysed protein diets. It is known that, to be recognised by the immune system, the large protein molecules has to be over certain molecular weight, which is measured in Kilodaltons (Kd).

Anything less than 10kD in weight is considered non-immunogenic. The source of the original protein varies from soy to chicken to bird feathers and the degree of hydrolysis can vary from has high as 10kD to as low as <1kD (Royal Canin Anallergenic).

Various papers have been published on how effective these diets are at picking up cases of food allergy. There is conflicting evidence, some papers suggesting that up to 90% of food allergic dogs do not react to a hydrolysed diet and other papers suggest as many as 50% can still react.

However, these diets also have the advantage of being well balanced for long term feeding and in theory, the animal should not become allergic to it in time, something that cannot be said for novel protein diets.

As already mentioned, because of cross-reactivity between different sources of protein, great care should be taken in choosing what protein and carbohydrate source should be used. In the UK, I would consider Kangaroo meat to be a good choice as it is not currently used in commercial pet food manufacture in the UK. Other choices can be shark steak, or other exotic species of fish or meat, but bear in mind how close evolutionary the meet can be to what has been fed before.

Vegetable sources of protein could be considered in dogs, but again, without knowing fully what has been used in previous commercial diet, choice could be difficult and in cats they are dangerous, as they need a meat based diet to get adequate levels of the amino acid taurine, a deficiency of which can case dilated cardiomyopathy and other problems with eyesight and immune function.

Many years ago, I had my own cat suffering with food allergy, which responded, at the time, to a venison-based diet. However, after 6 months he became allergic to venison as well.

Some allergists do consider a home-prepared novel-protein diet to be superior to a hydrolysed diet to test for food allergy, however they are not balanced and if food allergy is confirmed, a balanced commercial hydrolysed or limited protein should be tried.

You may ask, why not just do a blood test rather than doing theses food trial? It would be great if we could rely upon them, but we can’t. False positive tests abound and there can be huge discrepancy in the so-called positives between laboratories. I offer food allergy blood testing only for the purposes of looking at the NEGATIVES.

If an animal has been found to be suffering with food allergy after a diet trial then looking at the negatives may be useful in seeing what foods could be offered in future.

It has been found that there is an 80% predictive value of the negative test results, so for, instance if the blood test come back negative to duck, then there is an 80% chance that the animal may tolerate duck. I now offer this test along with environmental allergen testing for Atopy in animals that have already had a food trial or in the rare instances that an owner cannot get their pet to eat any of the hydrolysed or home prepared novel protein diets.

I hope this little blog has been of some use in putting into context the current fad for grain free, “hypoallergenic” and raw diets and what is needed to rule out food allergy as a cause of your pet’s allergic dermatitis.

If you’ve noticed skin or ear problems in your pet, it’s vital that you contact specialised veterinary professionals before symptoms worsen. To book an appointment with our Veterinary Dermatologist, simply call us below or email us on enquiries@dermvet.co.uk