Atopy is an incurable disease, but it can be managed well in most cases – recognise the symptoms and understand the treatment 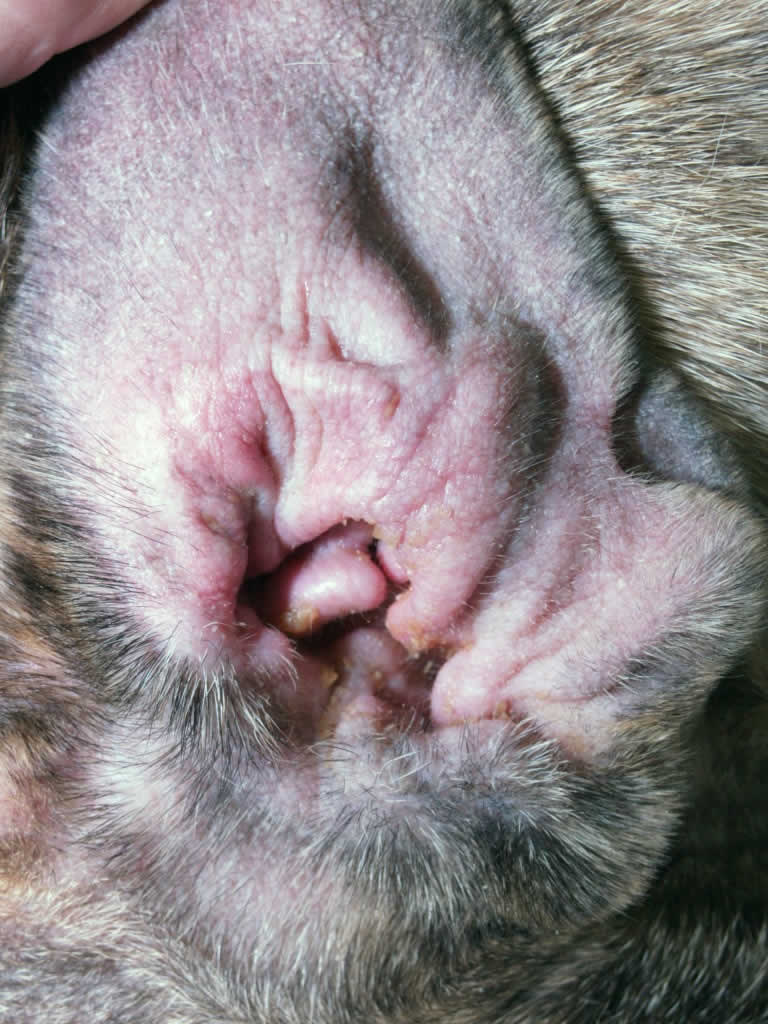 Atopy is the most common allergic disease we see in dogs. The condition also exists in cats, but it is much more difficult to diagnose.

Most cases start between 6 months and 3 years of age, although occasionally they can be seen either side of this age range. The current definition of the condition is “an inherited pruritic skin disorder characterised by the production of allergic antibodies to environmental allergens”.

However, the pathogenesis is complex and involves several abnormalities in the skin, the most important one being a defective skin barrier.

The classic signs are an itch and diffuse erythema (red inflamed skin) affecting the inside of the ear flaps, the upper ear canals, the skin around the eyes and muzzle, the underside of the body and the feet.

Many cases will only show one or two of these signs and approximately 5-10% of cases show the inflammation and itch only in their ears. Affected dogs will often scratch and rub their faces and chew at their feet.

The disease is complicated by the presence of secondary bacterial and yeast infection, and these infections will also contribute greatly to the amount of pruritus (itch) the dog is suffering with and also change the appearance of the skin. You may notice that the skin looks scaly and crusty. 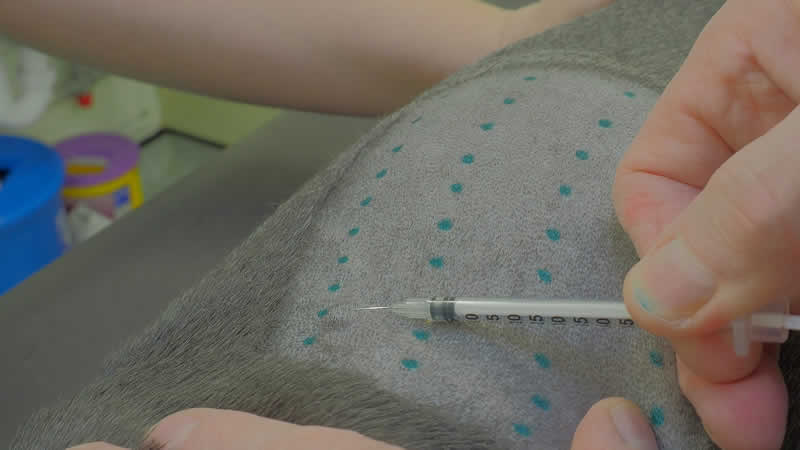 As the condition progresses, more chronic changes can occur in the appearance of the affected skin. It becomes thicker and more pigmented, sometimes almost black.

Much research has been done on this disease over the last 10 years and it has been discovered that dogs suffering with atopy have different skin to non-atopic dogs. They have a defect in their skin barrier due to differences in the lipid barrier.

These defects can allow environmental allergens such as house dust mite proteins and pollens to permeate the skin and be picked up by cells which then present them to the immune system.

The diagnosis of atopy is based on history, age of onset, clinical signs and after ruling out all other causes such as parasites, food allergy and contact dermatitis.

It is an incurable disease and although the ultimate goal with treatment is to abolish all symptoms entirely, a more realistic goal is to allow the patient to be ‘comfortably itchy.’ There is no ‘one size fits all’ treatment for this disorder and each case is treated individually according to the severity of the disease and the resources of the owner. 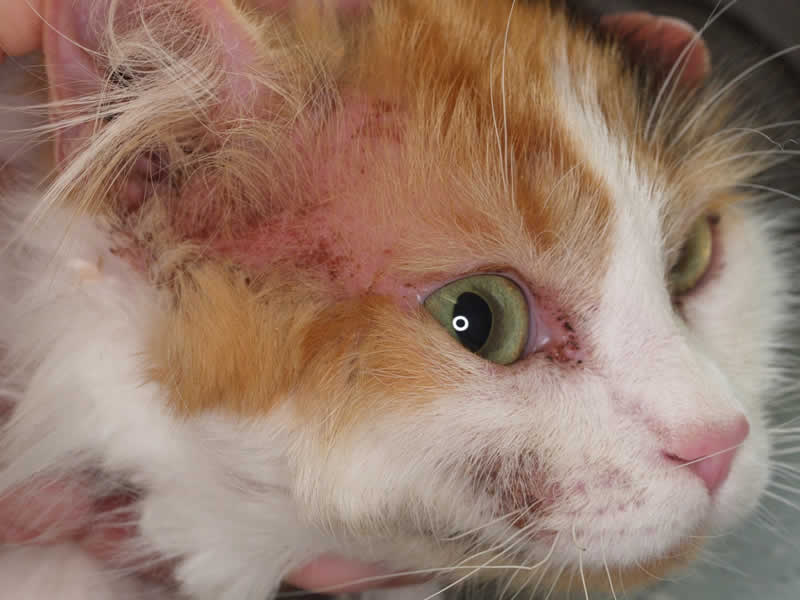 Treatment with antihistamines and essential fatty acid supplements and other pharmaceuticals may help only as an adjunctive treatment, for instance, lowering the dose of steroids that are required. Intermittent treatment with antibiotics and antifungals (both topical and systemic) may be necessary throughout the life of an atopic dog.

Topical therapy to improve skin barrier function is also necessary. All affected animals should be placed on a permanent programme of flea control as a picking up a flea can lower the “pruritic threshold” below which an animal may be itch free.

Regarding drug therapy, steroids are effective and cheap, but carry the risk of a multitude of long term side effects. Cyclosporin (Atopica) is usually very effective but is also very expensive and can have some side effects . In January 2014, a brand new drug, Oclacitinib (Apoquel), became available.

This is more targeted at reducing the itch, is fast-acting and effective in at least 60% of cases and has a cost between steroids and cyclosporin.

In July 2017, the world’s first veterinary monoclonal antibody Lokivetmab (Cytopoint) was launched specifically for the treatment of atopic dermatitis. This monoclonal antibody targets a cytokine called Interleukin 31, which appears to have only one function, initiating itch.

Lokivetmab is a very safe treatment and can be given alongside other treatments, although in many cases it is the only treatment needed. It is licensed for monthly injections, but I have seen some cases now that only require an injection every 6-12 weeks. I have found this treatment to be very effective in 70% of cases. Its cost is roughly midway between oclacitibic and cyclosporin.

Although both Octalcinib and Lokivetmab appear to be of great use in reducing itch and dermatitis in atopic dogs, neither is very effective at treating Atopic Otitis, as they are not great anti-inflammatory medications. In cases of otitis, steroids still play a vital part in the reducing the inflammation which leads to increased wax production, ear canal narrowing and infections. 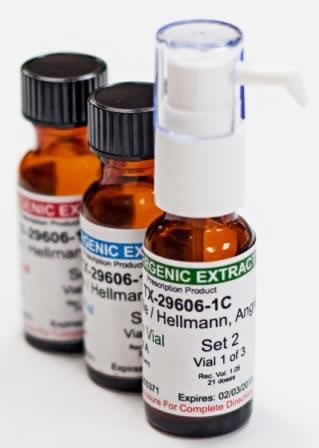 One treatment that is always worth trying is Allergen Specific Immunotherapy (desensitisation), based on the results of Intradermal Skin Testing or Serological Allergy Testing (blood tests), or a combination of both. This can reduce the severity of symptoms by at least 50% in 75% of affected individuals and can also help in the treatment of atopic otitis.

We have a full range of allergens for intradermal skin testing at the clinic. Immunotherapy is usually given by injection, building up from every 2 weeks to every 4 weeks.  For the last 20 years I have used Artuvetrin Injectable Immunotherapy and have been very happy with the lack of side effects.  We are now also offering sublingual immunotherapy (SLIT), where the allergens are given by a pump that delivers a small amount of the allergen mixture under the tongue; this is more owner-intensive, being administered twice daily, but has been shown to work for some cases that don’t respond to injectable immunotherapy. I currently use ACTT Allergy Drops drops for sublingual immunotherapy. 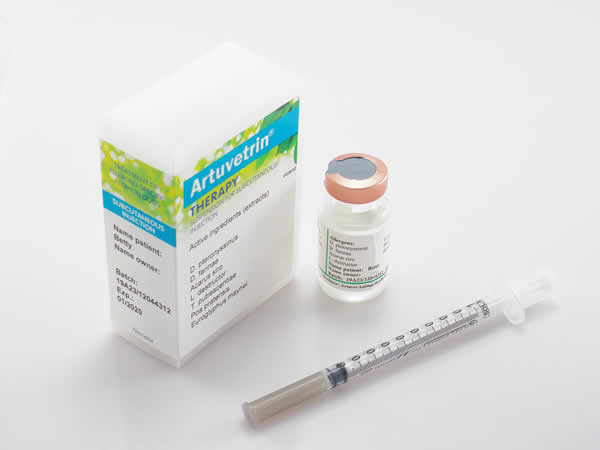 Immunotherapy has the advantage of costing the same whether your dog is an 8kg poodle or a 70kg St Bernard, whereas the cost of the other treatments is always dependent on bodyweight, making Immunotherapy very cost-effective for large dogs.

It can take anything from 2 -12 months to see the beneficial effects of immunotherapy and in the vast majority of cases, treatment has to continue throughout life.

Artuvet have produced some very informative leaflets on Artuvetrin Immunotherapy, an allergen guide and a client treatment diary for those pets being treated with allergen-specific immunotherapy. They can be viewed by clicking on the links below:

With the advent of the newer generation of drugs Lokivetmab and Oclacitinib, we can now control the itching in dogs during the first few months of immunotherapy without the side effects of steroids.

There are a very small proportion of dogs which fit all the criteria for canine atopy, but fail to produce reactions either on IDST or have positive allergen specific IgE on blood testing. These individuals are said to be suffering from “atopic-like dermatitis” and unfortunately, are not candidates for immunotherapy, although can respond to the other therapies given to atopic dogs. 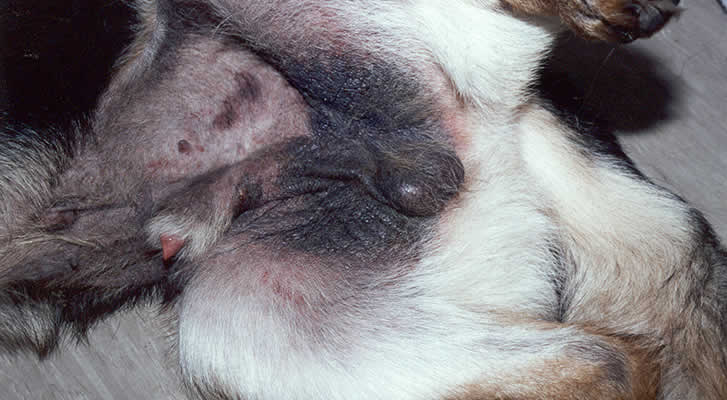 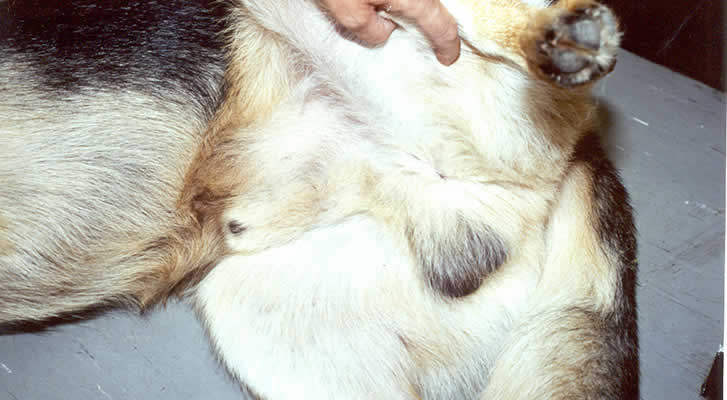