Artuvet is a company, based in Lelystad, Holland, that is a world leader in the production of allergens for both allergy testing and for allergen-specific immunotherapy vaccines which are very useful in the treatment of  of atopic dermatitis in dogs and cats. They produce the immunotherapy vaccines for both private veterinary surgeons and a few major laboratories in the UK and Europe.  For the last 20 years I have used Artuvet allergens in my intradermal skin testing kits and have treated hundreds of dogs with their immunotherapy vaccines.  Despite the development of new drugs and treatments for controlling the itch in Atopic dermatitis, allergen specific immunotherapy is the only treatment that actually  tries to re-educate the immune system to not react to allergens and is particularly useful if otitis is part of the prpblem, as these new products are not very good at relieving the inflammation and otitis that develops in atopic animals.  Many years of evidence shows that Allergen-Specific Immunotherapy can reduce the symptoms of atopic dermatitis by at least 50%  in 65-70% of animals. Another statistic is that 1//3 of animals do very well , requiring very little else in concomittent therapy,  1/3 improve but still need a little help with other therapies  and 1/3 don’t respond.  It is particularly worth considering using this treatment in medium to large breeds as the cost is not related to bodyweight, as are all other therapies.  I would alway recommend allergen specific immunotherapy for an animal sufferring with atopy, particulalry if the signs are perennial or if  seasonal with a long season and in those which suffer with otitis.

Although based in Holland, nearly 50% of  Artuvet’s market is the UK  and earlier this year I, along with other UK veterinary dermatologists, were invited to come over to Holland and view their facility in Leystad  and see exactly how these products that  we use are manufactured.

So, on 5th Dec 2019  I found myself at Birmingham Airport on a delayed flight to Amsterdam to meet up with UK Artuvet managers Michael Ward  and Kate Fazakerley and 9 other UK dermatologists  for dinner in Amsterdam the evening before our trip to Lelystad.  Its always great meeting up with other dermatologists, this is always a great way of discussing cases and the whole subject of veterinary dermatology and is just as useful to me as reading the latest scientific paper.

Early start the next morning with a coach trip to the Artuvet facility in Lelystad leaving the hotel in Amsterdam at 8 am. We arrived shortly before 9 am at the Artuvet facility and when we arrived were made very welcome. This company is small and has a great family atmosphere. Many of the people working there have been there for many years, including Marie Anne , who gave us the guided tour, whco had been with company for 31 years and was extremely proud to show us around. 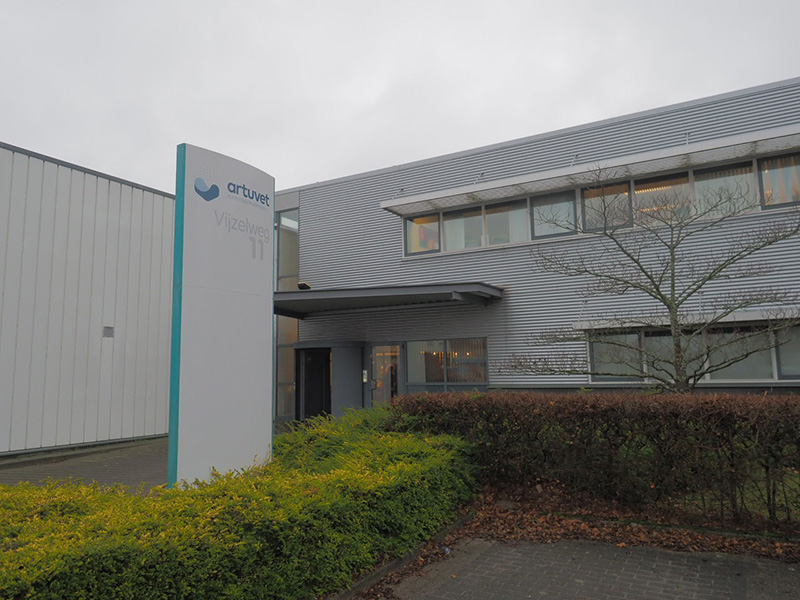 However, before the tour, we were first given a presentation by Joana Leite, Artuvet’s Head of Marketing, about their new serological allergy test that is coming out next month and is a major advancement, giving more accurate results ( preventing false positives for pollens) due to the use of CCD blockers.  Cross-reactive carbohydrate determinants (CCDs) are  carbohydrate structures attached to proteins in pollens and insect structures and can be responsible for false positives in IgE serology testing, as IgE specific to those determinants can be found in sera of allergic animals but are of no clinical significance.  The use of CCD blockers to cut out reactions to the CCDs results in a test with an  approximately 40% reduction in positives seen and reflects a much more accurate picture on what the significant allergens are, making choice of allergens to use in immunotherapy easier and possibly cheaper and the resuting immunotherapy  more effective, as with smaller numbers of allergens each individual allergen will be present in greater ammounts. ( a bottle always has the same number of protein nitrogen units (pnu) per ml whether there are one of 4 allergens in a vaccine. 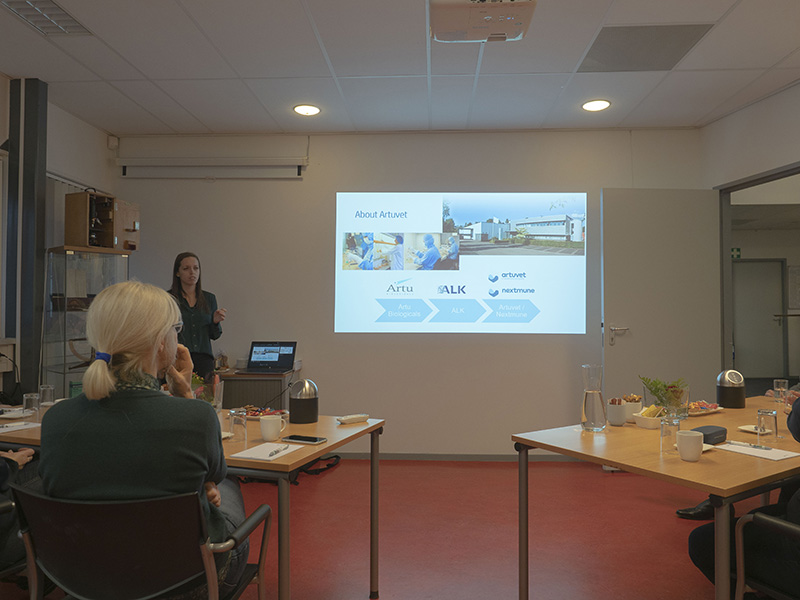 We were then given a guided tour around the manufacturing facility, but first had to don dust proof overalls.  The sterility  of the manufacturing site is ensured by the filtered ventilation and personnel wearing bio suits in the rooms where the allergens arfe prepared.

The first room we entered was the allergen store room where containers full of various pollens and epidermals and bottles of buffer solutions used in the manufacture of their allergens concentrates.  We were told  by Marie that it takes 100g of pollen to make 5g of the allergen concentrate. 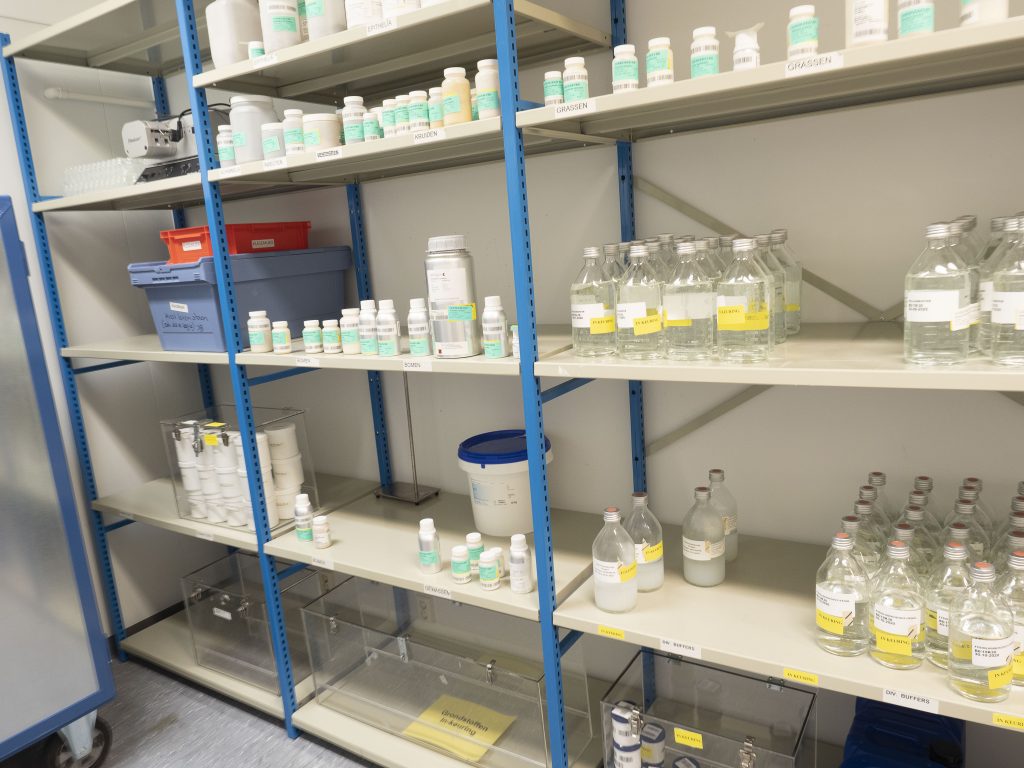 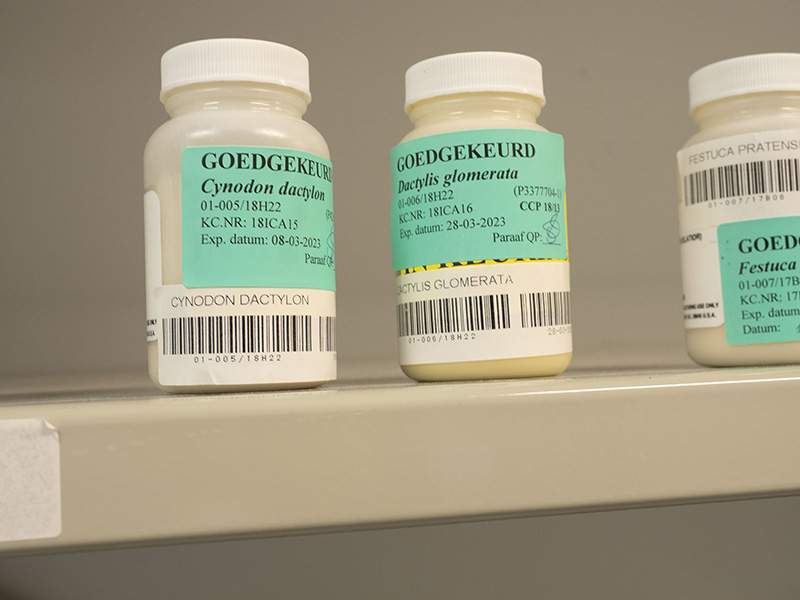 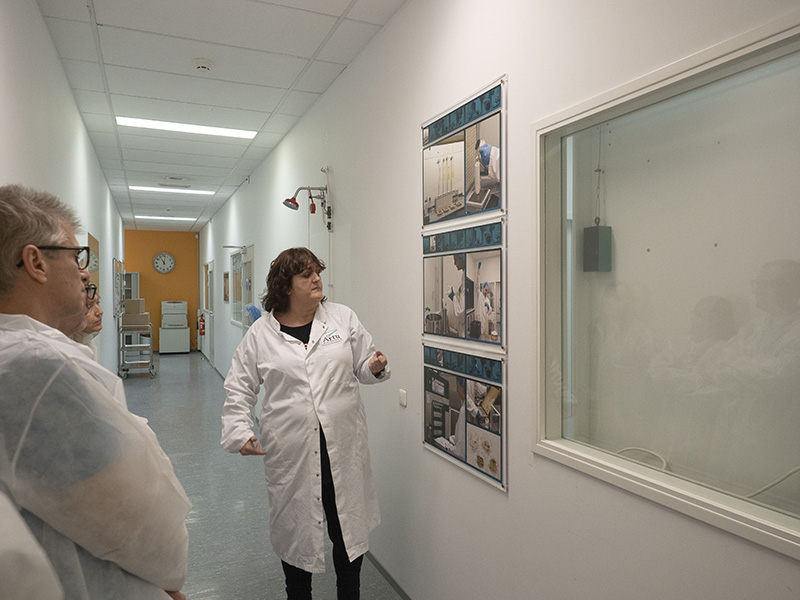 We were then shown, via windows, the actually making up of individual immunotherapy vials.  This has to be done in stricty sterile conditions, both to ensure that the vaccine will have the shelf like it needs (each bottle gives approx 10 months worth of Immunotherapy injections) and to pe sure it will not cause any infection after being injected into a patient. 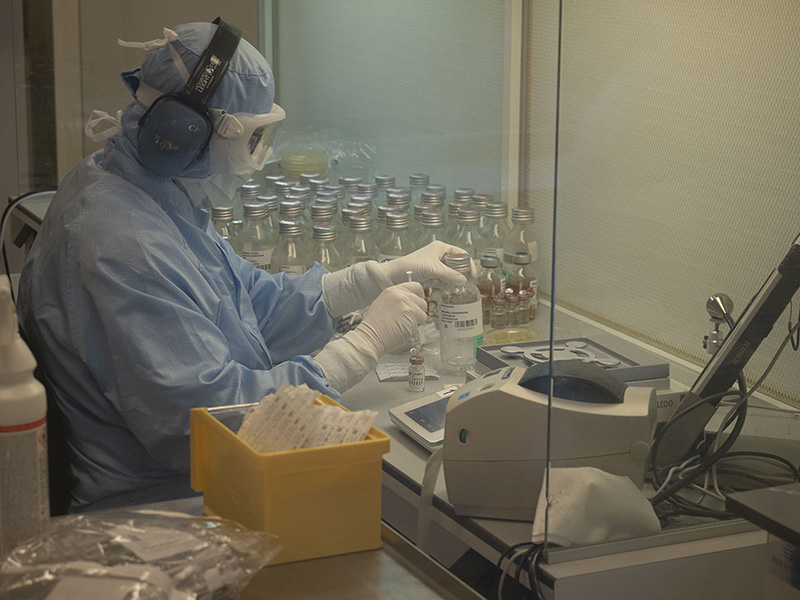 The person making up the vaccine has the information of what allergens to put in the bottle  together with animal’s and owner’s name on the screen in front of her and a separate  syringe is used each time allergen is taken from the large bottles of concentrate. All throughout the process the bottles ar weighed after each allergen is added and eveyting is double checked to make sure it is all correct.  Labels are printed to identify the bottle and then it goes to the next stage. 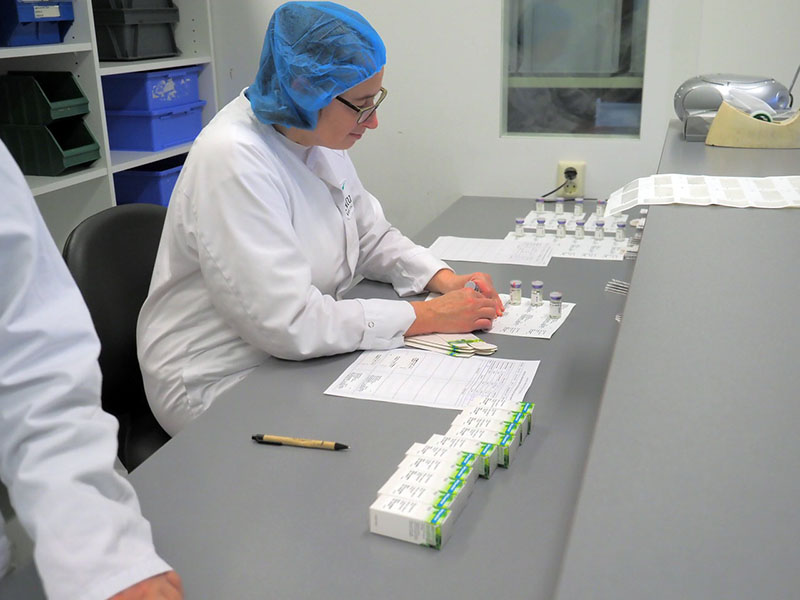 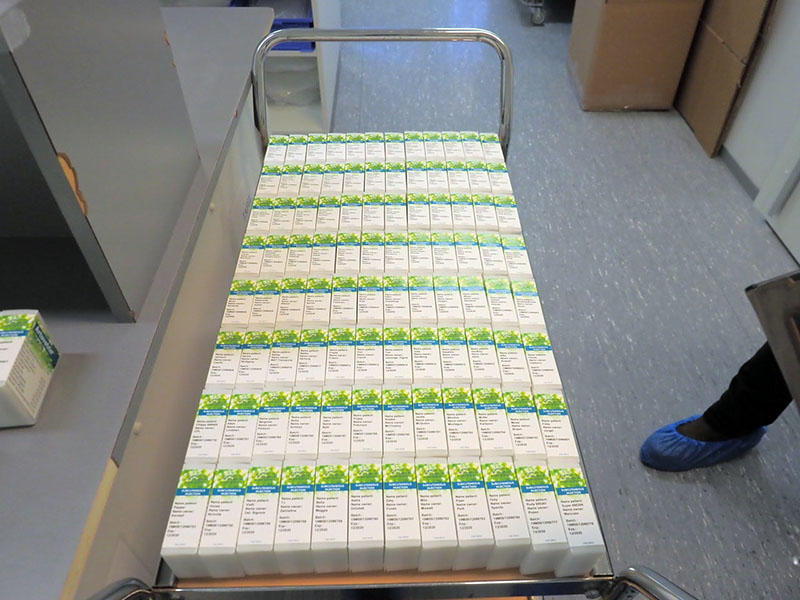 Whilst I was in the room with all the newly made immunotherapy vaccines, I was pleased and slightly  excited  to see some which I ordered for one of my clients only 4 days previously!

Although the vaccine can be manufacured in as little as a few days from ordering, it has to go through strict quality control checks that can take nearly a week, so the time period from ordering to delivery is usualy 2 weeks.

After our guided tour we had a light lunch  and then had a very intersesting interactive discusssion on the treatment of Atopic Dermatitis with Duch verterinary dermatology  diplomate Dr Annette Van der Lee , head of Dermatology for the Evidensia group of veterinary practices in Europe. Using an iphone app, the 19 question competition  during this discussion was very competitive even though for some questions  there were no right or wrong answers.

At 4pm , after a group photo,   we were collected by coach again to go into the centre of Amsterdam for a trip to the virtual reality flight over Holland 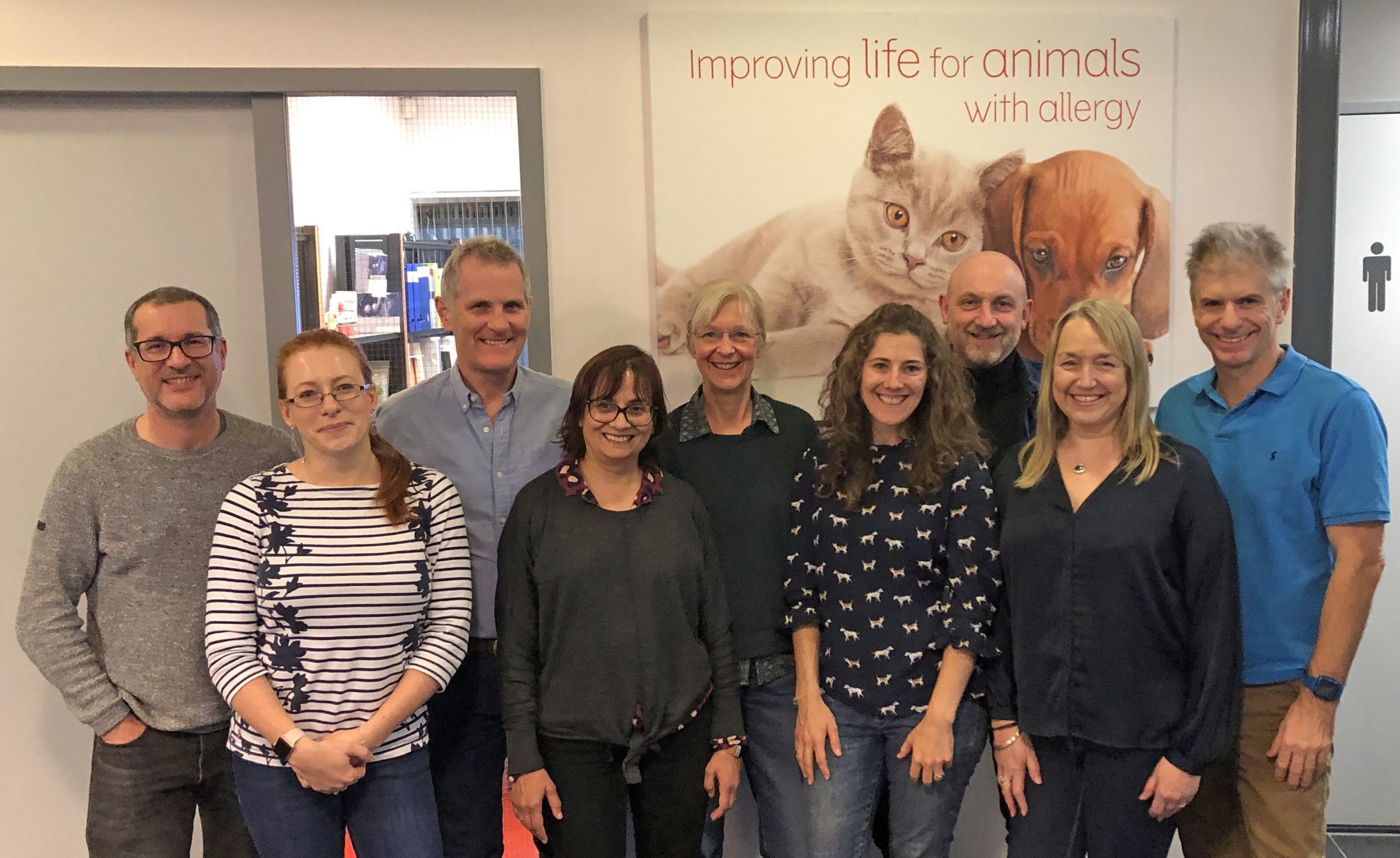 This was followed by a short ferry ride and walk to our restaurant for our evening meal  and eventual return to our hotel at 11.30pm……. a long day but educational, informative and  thoroughly enjoyable.  I’d like to thank Michael Ward and Kate Fazakerley of Artuvet in the UK  for the invite to see how its all done and all the staff at the Lelystad facility for their lovely warm welcome.